Sometimes, in Order to Find Your Voice, You Have to Shut Up

It’s been a few months since I’ve posted.  At first, the silence began because of the demands of balancing school, work, and just everyday life.  I also realized that I was at a point in my story where I realized that I was going to have to choose whether or not to vilify those voices from my old church that told me that I could change my sexuality.  My other option would be to gloss over the whole thing and try to avoid pointing fingers at all.  Neither of those extremes sat well with me in my heart.  I neither see those individuals as villains, nor do I see them as being completely without responsibility for the messages that they put out into the world.

Over the past few months, I have wrestled with this issue of how to depict these people who were (and, to be honest, are) so very dear to me.  I also realize now, through the amazing gift of hindsight, that, sometimes, in order to find your voice, the most important thing you can do is shut up.  One thing that happened over the course of the past few months is that I re-encountered the voice of another that those from my conservative evangelical days would also have labeled a “wayward soul” or a “prodigal” just as they would me, Jennifer Knapp.

Jennifer Knapp was a contemporary Christian music artist who was just rising to fame as I was taking my first steps into the evangelical world.  Early in her career, she came to Zanesville, my hometown, and did a show.  I actually worked her merch table at that show.  I have never really heard about her before that, but there was so much that was new being thrust at me then.  Some friends who arranged for me to work her table so that I could get into the concert for free assured me that she was going to be a bright star in the contemporary Christian world, and she was.  Then, at the very pinnacle of her career, as suddenly as she had arrived on the scene, she was gone.

Years later, she would emerge from seclusion, with her faith intact, and reveal that she was a lesbian.  Of course, many of her previous fans and supporters deserted her.  I re-discovered her voice through her new memoir, Facing The Music. Reading her book was very cathartic to me.  We were both part of this massive contemporary Christian world.  Of course, we occupied very different levels of it, but many of the experiences were very similar.  There were many times I had to pause while reading it because something experience of phrase that she shared very well could have come from my own lips. 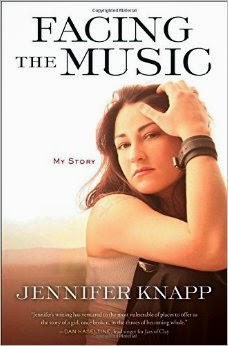 It was in Jennifer’s treatment of those who chose not to support her decision to be herself that I found the most profound and endearing.  Of course her initial feelings toward them were of anger and of defensiveness, but, ultimately, she could only feel pity for them.  That resonated with me.  When I walked away from conservative Christianity, I walked away from, what felt like at the time, was everything.  That church had become far more than a place of worship to me.  Everything I did socially, I did with people from that church.  If I needed to order flowers, there was a florist who went to the church.  If I had a banking need, I went and saw someone at a local bank who attended the church.  My hair was cut by someone from the church.  Had I ever had a need arise to build a home, there were general contractors at the church.  There were people to support my business and investing needs.  In retrospect, it all seems very closed and unhealthy, but, at the time, these people, this church family, were my everything.

Pastor Rob and his family were like a family to me.  In fact, to this day, the holiday season is still difficult for me at times because so many of holiday traditions during my 13 years at New Promise were tied in with theirs.  I would have my time with my family each holiday, and, then, I would leave, and go to their house to celebrate with them.  It wasn’t until years after I left that my own therapist would point out to me the unresolved feelings of loss and grief that I still carry from having left that community.  I have done some work on working through that, but, to a certain extent, I want to continue to be aware of that sense of loss.  On the other hand, now that I have separated from them, it has given me a much greater appreciation for my own family, and I regret having neglected those relationships as much as I did during the New Promise years.

Still, it is my hope and desire that anyone reading the words that appear on this blog know that it is not my intent or desire to paint anyone as a victim.  The folks at New Promise did not seek me out, and they did not come into the closet looking for me.  I went to them, and I asked them to help me shed a part of myself that, at the time, I did not want.  In many ways, my journey with them was self-chosen and self-directed.  I think that is one of the primary reasons that I do not feel a great deal of bitterness towards them or towards my time there.  I know that their actions and words towards me were out of nothing other than a desire to help me when I asked for it and to show me love in the only way that they know how.

Now, about 5 years after my departure from New Promise, I do not feel that I walked away to find myself with an inferior experience of Christianity, of God, or of human spirituality.  If anything, I have been able to open myself up to love in ways that I never would have felt the freedom to do so before.  I pray, someday, that those who I left behind will be able to give themselves permission to do the same.  My experiences have only introduced me to a God that is much bigger, wider, and more open than I ever could have conceived of during those years at New Promise.

Posted by Authentic Culbs at 7:01 PM