Today was exhausting, and it was amazing. I knew that I couldn’t let myself rest when I got off the plane, and I didn’t. I got to my hotel, checked in and unpacked as quickly as possible and then headed out into the city. I quickly realized that getting around the city via Lyft wasn’t going to be a feasible option as a ride one-way to the Golden Gate Bridge from my hotel in Oakland was over $50. Ouch! My first thought was, I can walk. It says that it’s going to take about 3 hours, but I’m on vacation. I got time; so, I headed out. I covered a couple of miles before I realized that walking the 12 miles from my hotel to the bridge wasn’t going to be feasible. I was going to have to become friends with BART, the Bay Are Rapid Transit System.” BART is a bit more complex than my COTA back home. For $2, I can get almost anywhere in the city in Columbus as long as I’m okay with not getting there in a quick and efficient manner. This is not the case with BART. You have to pre-load money onto a card, and, then, you have to pay for each leg of each transit trip separately, and they don’t all charge at the same rate. Some buses are even drastically more expensive than other buses. BART and I managed to get through our day, and I still managed to rack up a ridiculous number of steps for the day, which I’m thankful for. We’ll come back to that when I share with you about the late night dinner that I just devoured.

Anyway, I opted to prioritize the Castro over the Golden Gate Bridge. It was important to me to go back and reclaim that experience as my full self, and it is something that I’ve done before. On my walk, I came across a beautiful purple building that was decorated with evenly spaced Pride flags all around the building. Naturally, this caught my attention. As I walked up to the front door, I saw that it was the San Francisco LGBT Center. I almost walked in, but I opted not to when I saw that it was a Health Center as well as a Legal Clinic. I didn’t want to intrude, as a tourist, upon a space where folks go to seek help and support for personal matters It warmed my heart to know that they are there though. I also came across the Bob Ross LGBT Senior Center (No. Not that Bob Ross.) This Bob Ross was an activist and a publisher. 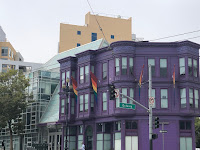 I also came across the Safeway, the supermarket of ‘Tales of the City’ fame. I did step inside, but, like Mary Ann Singleton, I also left without having found love. Shortly thereafter, I did step onto Castro Street. Seeing the theater and all of the Pride flags lining the street and the rainbow crosswalks was so validating and powerful, especially since the last time that I was in San Francisco, I was still fighting so hard to deny my true self. I actually remember that day in San Francisco 12 years ago as being a fun day, but I remember feeling tortured in the days leading up to it.

In preparation for the trip, we’d had one of our cars shipped out ahead of time. That sounds extreme,  I know, but we were going to be driving from San Diego to Oregon and along the northern states back to Ohio. That was a lot of miles, and, if we listed all four of us legitimately on a rental car, it was going to actually cost more to rent than to just ship a car out. With that much driving, we didn’t want to risk something happening and having to deal with the fallout from a rental car company and possibly not being properly insured to drive their car. Anyway, given that these were our circumstances, one of the guys in the group had a friend who lived in San Diego who agreed to pick us up at the airport and drive us to the storage facility where the car was. Then, we all went to lunch and hung out with him the rest of the day, including getting lunch (my first ever fish tacos) and going to the beach. Now, this individual who picked us up (I don’t even recall his name now) was, in my opinion, incredibly attractive. This would be fine if I hadn’t trained my mind at the time to believe that I was the vilest of all creatures for having the thoughts that entered my mind as we found ourselves together at the beach later. So, I spiraled. It was bad. I made myself miserable, and I was a pain in the ass to the other guys as we drove away from San Diego towards Los Angeles. In retrospect, this is all so clear. Of course, I reacted this way. My brain had been filled with so much negative programming that I was wired to hate myself for almost anything. If only I could go back and whisper in the year of my younger self at that point or at one of many other points, “Dude, you’re gay. Can we just get past this and move on?”

In many ways, I am glad that neither myself nor anyone else was able to reach me until the time that I was ready to confront, address, and accept who I am, all of me. If I had not gone through those years of self-denial, I would not be able to see the beauty of the acceptance that I receive from myself and others in my current reality. Today was one of many times that I reflected how amazing it is that I actually get to live this life. The terrified and distraught individual who walked away from his former church community just a couple of years after that previous trip to San Francisco could never have foreseen the community that he has today nor the opportunities that are put before him. I am so thankful that my previous thinking, though I think very differently now, gives me the perspective to appreciate what it is to live this beautiful life that has welcomed me into it. There are many ways in which my life could be better. I’m sure that everyone could say that there are ways in which their lives could be improved, and I get to live a pretty good one.

I did make it to the Golden Gate Bridge by the way. It felt a little surreal because, more than anything else the I experienced today, it felt like it was exactly the same as I
remembered it from that previous trip. I made me simultaneously feel sad for the change in the relationships with the other guys that I went on the trip with, and it also left me feeling very grateful that I was laying down a new memory in that location. If you'd like to see more  of the photos that I took from today, you can see them on my Instagram (culbs1138). 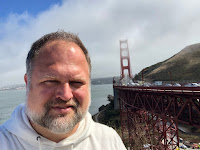 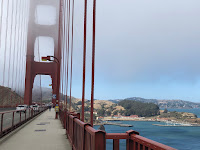 Looking forward to getting some sleep and seeing what the city has to offer tomorrow! 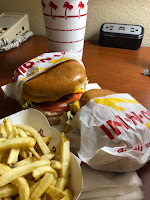 Oh! As far as that late night dinner, I made a late night trip out tonight to get some In-N-Out. I couldn’t resist. Probably a bad idea, but I definitely think that I burned through enough calories today to absorb the hit. Plus, I’m on vacation, right?
Posted by Authentic Culbs at 10:32 PM