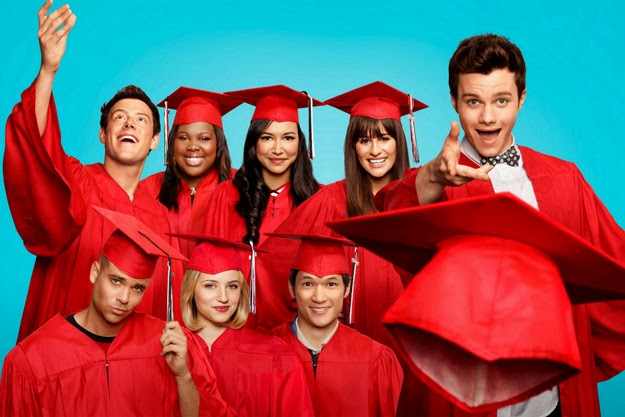 I finally made time tonight to watch the final two episodes of Glee.  Based on what I had seen on Facebook and heard from a couple of friends, I expected it to be an emotional experience for me, but as I watched, I began to really feel the significance of the loss.  I even paused the video a few times as if by clicking on the pause icon I could stop it from ending.  I began to ask myself why this was such a significant thing for me.  What was my connection to this show?

As I began to look back at my memories of the last six years of the show, I began to reflect on the events of the last six years of my own life.  Glee first aired on May 19th of 2009.  At that point, I was taking my first steps to explore the possibility of establishing an ex-gay ministry in Muskingum County, believing that my own same-sex desires were the product of a sinful nature, demonic influence, or both.  I believed that God, the architect of my body and my being could fix me.  I saw prayer and surrender of my, at the time, unwanted same-sex desires of God as my way to being able to have a normal, sexually fruitful life with some special lady.

At this point, I had not even attended my first meeting of Bridge of Hope, the ex-gay men’s group that I would drive an hour from Zanesville to Columbus for every Sunday night in order to observe what they did in hopes of duplicating it in Columbus.  It would, of course, be those meetings that forced me to confront my own homosexuality, what I learned that summer to referred to at Bridge of Hope as my “sexual brokenness.”  As I came to know the men in that group, I was forced to try to reconcile the broken lives of the men that I saw trying to “fix” themselves in order to please God and their loved ones with the thriving vibrant lives of friends who had accepted themselves and were living lives filled with happiness and peace about who they were.  That experience broke me.  It shattered my faith and my understanding of myself and left me holding fragments of my previous self to attempt to put back together again.

I was aware of Glee when it first began to air, but I saw it in a very different light than I do now.  From my previous viewpoint in the world, believing that I understood the mind of God and that I could be depended upon to relay God’s opinion on a great many matters, I saw the show as a tool of Satan, affectionately referred to in evangelical circles as “the enemy.”  I saw it as a means of desensitizing the world to the seductive and destructive power of homosexuality.  I saw it as evil, and I knew that I could not risk exposing myself to.

Obviously, as I began to come to terms with my own identity, my perspective on the show began to change.   I caught an episode here and there during the tail end of the first season, and, as soon as the first season was released on DVD, I rushed to buy it so that I could be ready for season two to air.  I was drawn into this fictional world where, while gay kids still got picked on, there was at least a group and a place where they could be safe.  The notion of a gay kid being genuine friends with the quarterback of the high school football time was a concept that appreciated.  It was an attempt to, as the final episode called out, see the world as it should be, not as it is.  I like that.  I wanted to live in that world.
As the show progressed, I fell in love with the characters and the relationships between them.  I know that many grew frustrated with some of the shows weirder moments.  I’m not going to lie and say that some parts of the series didn’t annoy me, but I will say that, just as the show demonstrates that you can remain connected to someone despite differences, it didn’t deter me from the show.  I stayed connected.

When the news broke of the death of Cory Monteith, I felt genuine loss.  I also felt guilt as I was forced to admit that while I was living in a world that was more and more accepting of me, I still contributed to a world that contributed to the stigma and shame of addiction, even if it was only by my silence.  How could we, as a culture, put this kid on a pedestal, celebrating his sobriety in the media, and hold him to a higher standard, a place in the heat of the spotlight where he felt that he couldn’t turn for help for fear of disclosing that he still struggled.  Mostly, when I learned of Cory’s death, I just felt the loss of a friend.  It was the loss of that symbol of strength in the connection between the cool kid and the gay theater kid.

Glee, in retrospect, did exactly what a conservative, evangelical, fundamentalist former me feared that it would, it made huge strides in the humanization of not only gay kids but of all kids who don’t fit society’s standards of “normal” or “cool.”  It played a significant role in helping the world to evolve, to become better.  At the same time, the show was a friend to me on my own journey of evolution towards the acceptance of others and myself.  Even though the time has come to say farewell to my traveling companion, I will always treasure the smiles, the laughs, and the tears that we shared along the way.  Goodbye, Glee.

Posted by Authentic Culbs at 10:00 PM