This past Wednesday, when I received a text from the Field Director at Equality Ohio asking me if I would be willing to share my story on October 28th, I didn’t think much about it before saying that I would.  I wasn’t sure which part of my story he was asking for, but, at this point, I don’t have many secrets.  Pretty much anything anyone wants to know about me can be ascertained from a quick Google search.

The next day I began to wonder more about what it was.  Was I being recorded?  Was it for a specific type of media?  Would I be speaking in front of people?  Regardless of the response, I would have probably agreed.  Equality Ohio has referred me for a handful of interviews, and I knew that they wouldn’t put me in a situation that would be unsupportive.  When the response came back, my anxiety spiked.  I learned that I would be speaking in front of people at the Statehouse regarding the need for non-discrimination protections for LGBTQ people in Ohio in the areas of employment and housing.  I was filled with a mixture of honor and fear.

When I mentioned to a few friends that I was nervous, they said that they couldn’t understand why.  Why, after all the other public work that I have done, would this make me nervous?  I’ll admit that my first reaction was selfish.  Talking in front of people scares me to death.  I push through and do it when I believe the importance of the work necessitates it.  I this situation, having experienced what it is to be in a situation where I had to come to work every day knowing that I could legally be fired at any time because of who I am, I didn’t have to hesitate on whether or not the work was worth me dealing with some anxiety.

Coming to this realization brought a new kind of anxiety with it though.  The weight of importance that accompanies this kind of legislation is enormous.  The words that I would say or not say could have an impact on whether or not this bill would pass.  What, for me, is a simple issue of basic fairness is, to some, an unnecessary measure to extend protections to people that they feel don’t deserve them, to people like me who they feel don’t deserve them.  My hope is that the legislators in my state will send a message to me, and so many others, that I do matter.  Having the Supreme Court of the United States, back in June, affirm that the relationship and marriage that I hope to share with another man someday will have the same significance and legal standing as anyone else’s is amazing.  It truly is, but, it makes it even more disheartening that my state continues to send the message that the basic needs of employment and housing don’t matter for me. 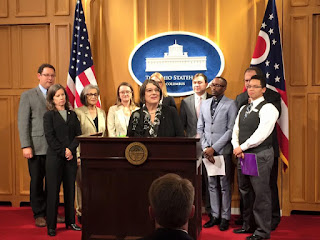 I was honored, on Tuesday, to be a part of the introduction of this very important piece of legislation, The Fairness Act, by Representative Nickie Antonio.  My hope is that Ohio is finally ready to make a clear statement in support of fairness and equality for ALL Ohioans.

You can watch the press conference of the introduction of The Fairness Act at the link below.

Posted by Authentic Culbs at 8:12 AM