Get Out There and Vote, Ohio! 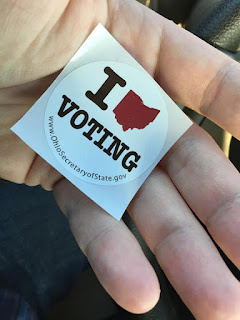 I just want to say that I love my state.  Election Day is never dull in Ohio.  Whether it is a presidential election year or not, Ohio voters are passionate about their views and the issues.  Of course, the big issue in Ohio this time around is the legalization of marijuana.  I’ve got to admit that I have mixed feelings on this one.  The compassionate progressive with me screams “yes!”  The future substance abuse counselor in me screams, “no!”  The progressive voice in me even screams, “no!” when you factor in the aspect of the handful of very rich that would be created by the passage of Issue 3.  I hear the voices in support of the issue saying that, if this doesn’t happen now, it probably won’t come up again for a decade, but I have to think that we will see this issue back sooner if it does not pass today.  If it does pass, my hope would be that there would be a move to amend it in the future to create a greater environment of free, but regulated, enterprise around it.  By regulation, I mean that I think that anyone should be able to get into the business as long as they have met certain administrative and qualitative standards in their operations and production of the product.

With regards to Issue 2, this one is complicated for me.  I support the creation of a provision by which bi-partisan oversight would be responsible for evaluating ballot issues, like Issue 3, to determine if there is a monopolistic element to them.  Of course, I hear the voices of the opposition who say that this could be used to silence the voices of the people and keep ballot issues from moving forward.  I believe that the bi-partisan requirement would keep that from happening, but, even if it doesn’t, the beauty of a democracy is that we can vote to change it again or we can vote to change the voices who are a part of the process.  I have mechanisms through which I can change elected representatives.  I don’t have established processes by which to control the financial elite once they’ve been given the power to do something.

Issue 1 was really the only no-brainer for me.  Of course, I would like fair, bi-partisan input into how the districting lines are drawn for voting purposes.  Gerrymandering is just wrong.  We need to make sure that our representation is fair in Ohio and representative of the people who occupy our great state.  We really are the heart of it all, Ohio, when it comes to U.S. politics!  Now, get out there and vote!