A Sad Conclusion and a Beginning of Healing

Tonight, I attended a candlelight vigil for a young Columbus man who went missing on March 5th.  He was a young gay man.  He had been out with friends at a bar that I sometimes go to.  I don’t remember ever meeting him, but I’m sure that we occupied the same space at some point.  I’ve heard that Columbus is a big city that feels like a small town, and it’s a true statement.  It’s still the kind of city where running into random friends and acquaintances happens.  If the overall city feels that way, you can imagine what it is to be within the even smaller LGBTQ community.  Even if you don’t know someone personally, you’ve been in a room with them, you’ve seen their face.  There aren’t that many degrees of separation between any of us.

The young man’s name was Joseph “Joey” LaBute, Jr.  Shortly after he went missing, people started sharing things about the disappearance via social media.  On Saturday, March 12th, over 200 people participated in a search of the surrounding neighborhood where Joey was last seen.  Nothing was found.  This past Tuesday afternoon, it was a announced that the body of a young man in his 20’s had been pulled from the Scioto River.  No identification was released.  There was an autopsy conducted to determine the cause of death, but it was inconclusive.  The whole community waited anxiously while dental records were obtained to match them to the body that was found.  Today, it was announced that the body was indeed Joey LaBute. 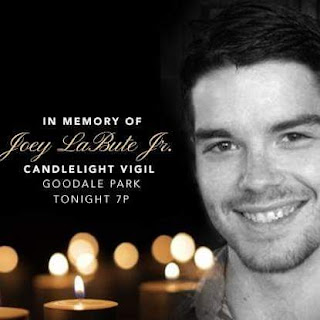 All through this the reaction and response from the LGBTQ community and our allies here in Columbus has been comforting.  In so many ways, this case touches all of us.  So many of us have left a bar with someone we met or accepted a drink bought for us by someone else.  Of course, no one knows, yet, the exact circumstances of Joey’s disappearance, but the unsettling part is that this could happen to any of us.  I try to be so careful.  I normally only go out in groups.  I always make sure that there are one or two people in the circle whom I trust implicitly, Joey was with a group of friends that night, people he trusted, and whatever happened, it still happened to him.

Earlier today, the aforementioned vigil was put together.  Like everything else involving this situation, it spread like wild fire across social media, being shared over 700 times.  It was a simple gathering and brief due to the threatening storm overhead, but it was something.  It wasn’t enough, of course.  Nothing ever is in these circumstances, but it was good.  It was healing.  It felt good to be surrounded by so many familiar and unfamiliar faces all gathered for the same purpose.  Collectively, we have been wounded, and even though we still crave answers that may never come, we can be there for each other as we start to move forward from this tragedy and reminder of our own vulnerability.

Posted by Authentic Culbs at 6:25 PM