This post is part of my on-going story that I have been telling through this blog.  If you are just coming here for the first time or if you need to catch up, you can catch the earlier parts of the story in Setting the Stage or Act One.  See the navigation panel to the right labeled My Story.  I hope that my sharing of my story is helpful, encouraging, informative, or at least entertaining for you.  Please feel free to comment or contact me at the e-mail address below.  Thanks!

The demise of the Cord happened over a period of time, but there was one event that the fall can be traced back to.  We were having a meeting at the home of one of the guys in the group.  We had a lot of our meetings there.  It was a rural setting with lots of space that allowed us to be creative in our activities with the guys.  The next morning one of the other members of the group was leaving to go to Peru, I believe, for a mission trip; so, we wanted to do something special for him and get the guys together.  We didn’t really have anything planned beyond just getting everyone together and wishing him well on his trip though.  Well, having a bunch of adolescent guys together and nothing for them to do is kind of a recipe, not necessarily for disaster, but certainly for mischief.

Bored and wanting something more interesting to do, some of the guys decided that they wanted to go to a movie.  On the surface, not an altogether bad idea.  I don’t remember what other options were available, but, after some debate, the guys decided that they wanted to go see a new movie that I just come out called ‘Road Trip.’  Perhaps, you’ve heard of it.  Now, this was the summer of 2000.  It would be six and a half years later before Apple would introduce the first i-phone and the smartphone revolution would take place; so, I didn’t have immediate access to information about the film.  I had heard of it, and I knew that it was R-Rated.  Now, bear in mind that I went to a church where parents forbade their children from reading Harry Potter.  This was prior to the first Harry Potter film being released.  Some of the people attending the church who were around my age had even been forbidden from watching the Smurfs cartoon series as children because they were supposed to represent the fetuses of aborted children living in the forest.  There has been much debate about what the Smurfs represented on Snopes if you’d care to check it out.  All of this to say that these were parents who believed that their children’s very salvation could be undone by the evil workings of something like an R-Rated movie.  I knew that they would not be pleased. 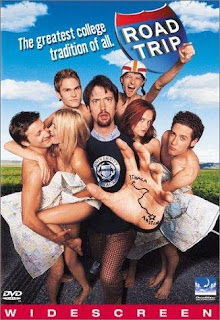 When I was discussing my feelings on the subject with Anthony and Brent, they felt that we should go ahead and take them.  They said that the guys really wanted to go, and they didn’t think any parents would really find out about it.  I continued to dig in my heals, but Brent and Anthony reminded me that I had ridden with them, and that unless I wanted to arrange my own transportation home, I should get onboard.  So, at that point, all I could do was hope that it wasn’t as bad as it probably was.

The movie was that bad.  I didn’t see all of it.  The young man who was going to be leaving on the mission trip the next morning felt convicted by the content of the film.  Convicted is the term that conservative evangelicals use when they feel that their conduct or attitude is being offensive to God.  He left the theater.  I followed him, and we spent most of the rest of the film in the theater lobby and parking lot just talking about his trip to Peru.

I don’t think that I have to tell any of you that the film was that bad.  Also, parents did find out.  Some of them forbade their children from attending future meetings, a completely understandable reaction.  This was not church group material.  Things slowly began to disintegrate with the group.

As I look back on this experience, I have regrets, and I have moments of pride.  It’s such a weird thing for me in terms of my own journey because I was using this group as a way to work through part of my own process.  I honestly thought I was helping myself to form healthier, more masculine bonds with other males, and I thought I was teaching those younger than me to do the same.  This logic made perfectly rational sense to me at the time though.  As the Cord was unraveling, the ropes that would keep me bound in this mindset were getting stronger and stronger as this experience only reinforced to me more and more what a failure and how inadequate I was in God’s eyes.