Ever since this whole bathroom issue has become a cause for concern, I’ve wondered what I could contribute to the conversation.  All sides are concerned about safety and privacy.  Of course, I come down on the side of the transgender community, but, while my stance in clear and, to me, the obvious right choice in this situation, what does it benefit for me, a cis gender gay man to get into the conversation?  While I have many transgender friends, I cannot speak for them.  Being a gay man, public restrooms and locker rooms can have their sources of anxiety for me, but I can’t possibly ever fully understand what the experience of transgender folks is.  So, as I have contemplated what, if anything, of meaning I can bring to this discussion, I have decided that the only and best thing that I can bring to the table is my own experience, my experience of transgender persons and of public restrooms.
Not so long ago, in early 2009, I thought that being gay was a sin punishable by eternity in hell, feeling myself in burning and anguish without end.  This is way I worked so hard to change this part of myself and to change it in others.  I share this only for context purposes.  Obviously, I know that sexual orientation and gender identity are very different things, but, if it took me a while to process that God could be okay with me being intimate with a member of the same sex and continue to also be a person of faith, it took even longer for me to come to a place where I could embrace the notion of someone being transgender.  As if it’s my journey to accept, right?
It would take me about a year after I had first begun to accept that idea that God loved me as I was before I would be confronted with the idea of what it was to be accepting of someone who was transgender.  I very much bought into the notion that, if there was an intelligence behind the design of creation, there had to be a purpose and a utility for everything.  During my early days of questioning, I retreated into books by people like Lee Strobel who seek to conclusively prove the events of the Bible through the tools of scientific and journalistic investigation.  I was so afraid of the questions that I was asking that I wanted to prove to myself that the Bible and my literalistic way of reading and understanding it were true and indisputable.  God creating two genders that would complement each other for the purpose of procreation made sense to me.  Therefore, God allowing two individuals of the same gender to engage in sexual acts together or the idea that God could place someone’s soul inside a body that was not correct for them was a bit of a struggle for me at first, but, then, something happened.
I met a transgender person.  She was smart.  She was capable.  She was a military veteran.  She was a leader.  Then I began to more more people who were transgender.  As I began to know some of them better, I felt comfortable asking them about their journeys, and they felt comfortable sharing.  My experience has been that, if a transgender person feels safe with you, they will tell you that you can ask them questions about their story.  I never assume that I have that permission.  I wait for it to be given.  Over time, my questions have done nothing be increase.  I have shifted from a perspective where questioning was bad and a sign of spiritual weakness to being in a place where I am captivated at the endless diversity and complexity of God’s creation.  Transgender people are just a part of that.
Now, let’s talk about restrooms.  I’m gonna be completely upfront and honest here.  I’m from a small town in southeast Ohio.  Growing up different, and, by different, I mean gay, I grew up with a lot anxiety around public restrooms, particularly urinals.  While, I never identified as gay in elementary and high school, my sexuality was often questioned by other boys in my class.  In retrospect, maybe they weren't bullies.  Maybe there were just insightful.  If someone, even thought you were checking them out at the urinal, you could get called names or shoved around a bit.  Using the stalls wasn’t always a solution either for multiple reasons.  First, men in general and young boys in particular seem to love to pee on a toilet seat.  If you stood in a stall to pee or, God forbid, they get the idea that you might be using the stall to sit to pee, your masculinity or sexuality may be questioned as well.  So, even as a cis gender male, bathrooms have, and can still be, a place of stress and let’s not even talk about the traumas I have experienced in locker rooms.  Even as an adult, locker rooms can be tense places for me.  Eyes are ever forward because I am not going to look or even give you reason to think I might be.  I just want to get into and out of the room safely.  Now, as an adult, I always do, but, the anxiety of times gone by is still there.  I can’t even imagine what terrors members of the transgender community have experienced in locker rooms. 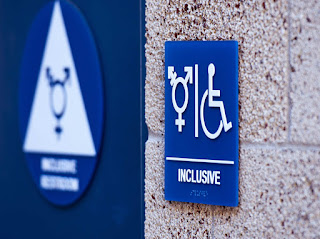 Now, for a moment of absolute honesty.  As someone who has done a fait amount of LGBTQ activism, I have been to many events where the normally present gender identifying signs on the outside of restrooms are covered with gender-neutral signs, letting the participants at the even know that anyone is in any restroom.  I remember that first time that I found myself at an even that used signs like this and had to use the restroom.  I was a bit uneasy about it, but I needed to go.  I didn’t even know which restrooms was really the men’s or the women’s; so , I just picked one and went inside.  It turned out, that first time, that I did walk into what would have normally been the men’s room.  I felt safe with making this determination based n the urinal on the wall.  My biggest fear walking in was that there would be a woman inside and that I would make her uncomfortable.  The next time, I had an experience like this, I felt less uncomfortable in going into a restroom.  There was someone who presented as female in the restroom with me.  I just went in, used the restroom and left.  That was it.  Now, I don’t even give it a thought.  It’s just like anything else that’s new, but, once you get past the initial trepidation that many of us experience around change, we realize that the change wasn’t as big as we thought it was.
I would also like to point out that, at least in Ohio, it is perfectly legal for any person to enter any restroom regardless of the sign on the door.  It is only that person’s conduct inside that restroom that could result in criminal charges being filed.  Do I believe that there are people in the world who seek to prey upon people in a vulnerable place such as a restroom?  Of course, I do.  There is evidence to support that, but being transgender and being a sexual predatory are two very different and unrelated labels.  This overreaction is typical of what we do as a species prone to herd mentality.  If there is an act of terrorism that happens to be carried out by a group of persons who are Muslim, we assume all Muslim persons are racist while being a terrorist and being a Muslim have very little to do with each other. If some Christians are vocal against same-sex marriage, then the picture is painted that all Christians hate LGBTQ persons.  The situations with persons who are transgender makes absolutely no sense though because I am still yet to be aware of a single case in which someone who is truly transgender has actually preyed upon someone in a restroom.  Who are these parents anyway?  Why are they allowing their children to go into restrooms alone anyway?  Don’t they know that there are Republican elected officials in the world?
I had made the decision to write this post this morning since Ohio is considering a bill similar to HB 2 in North Carolina.  Then, of course, this evening, the Department of Justice told North Carolina to not implement HB 2 based on it violating the Civil Rights Act.  So, I debated on whether or not I should still right it, but then Governor Pay McCrory decided that he wasn’t going to let some little government agency derail his crazy train, and I decided that maybe I should still share my thoughts.  Discrimination is just flat out wrong, but discriminating with absolutely no basis fact is just delusional.

Please check out my new Facebook page!  This should make interaction easier!  Please "Like" the page and feel free to leave a comment!
Posted by Authentic Culbs at 6:54 PM