Shouldn't Grace Be Available to All People in All Times?

Like many of us in this contemporary, ever-connected existence, the first thing I do upon waking each morning is to reach towards the bedside table for my cell phone, fumbling in the dark for what has become our connection to family, community, and the world.  There were no text messages that I needed to respond to; so, I went directly to Facebook to see what had happened in the world over the past 7 hours.  The very first thing I saw in my newsfeed was the headline, ‘Good News responds to clergy coming out letter.’  My internal response to this was a sincere and heartfelt, “Oh boy.  Here we go.” 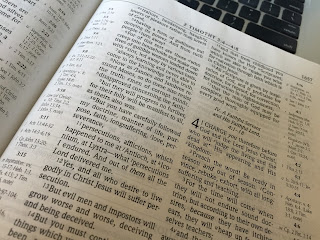 As I take us back to the debate at hand, let’s go to every literalist’s favorite scripture on this debate of scriptural validity; at least, it was mine and still is.  2 Timothy 3:16, in the NRSV, says that “All scripture is inspired by God and is useful for teaching, for reproof, for correction, and for training in righteousness.”  This translation used the phrase “inspired by God.”  Other versions use the term “God-breathed.”  While I still see truth in those words, my understanding of that verse has evolved to see a distinction between something that is inspired by God and something that is dictated by God.  I see sacred texts as humanity’s efforts to understand ourselves, to understand God, and to understand the connection between God and ourselves.  To me, that voice of shared seeking to understand makes them sacred.

One of the aspects of God that I am most thankful for is God’s grace.  I sincerely believe that the voices on both sides of this debate over human sexuality within the United Methodist Church live their lives in such as way that is aimed at pleasing God and fulfilling what they believe is God’s will for their lives, and, despite our very best efforts and intentions, we all fall short (Romans 3:23).  Still, when we fall, we pick ourselves back up and continue to walk out this life that we believe we are called to.  Why would we be so selfish and so arrogant as to assume that grace belongs only to us?  Why would we assume that the writers of scripture, sincerely God-seeking individuals, were held to a level of infallibility, devoid of grace, that we would never hold ourselves to?  To do so, takes something away from the beauty of God’s grace, and it robs us of the compassion that we should extend to all of humanity in our present, our future, and…in our past.

My understanding of God and scripture is more fluid today than it was in the past.  It is shaped by my own ever growing and changing understanding of the nature of God.  Rob Bell, in his book What We Talk About When We Talk About God, comments that, “Like a mirror, God appears to be more and more a reflection of whoever it is that happens to be talking about God at that moment.”  I believe that we all, across the connections of the United Methodist Church, all of Christianity, and of all who claim to adhere to a spiritual/religious system of beliefs, need to acknowledge the truth of that statement.  I have often remarked that God created humanity in God’s own image, and humanity has not stopped repaying the favor every since.  We all envision a God that thinks like we do.  Is it possible that God’s house is big enough for all of us, the whole family and not just the ones we like?

P.S.  -  One more thing.  The statement from Rev. Tom Lambrecht of the Good News was exactly what I thought it would be.  It was in line with what a former me would have written, a basic assertion that we all have our sinful natures and that it is only by acting in accordance with those natures that we sin.  I would also agree with him that to acknowledge and allow openly, actively practicing LGBTQ persons to serve in our churches would be “to abandon clear scriptural teaching and 2,000 years of Christian understanding.”  I think he got that part right.  I think that what our church teaches about scripture has been clear.  What is not clear is the scriptures themselves.  Based on biblical texts, I can make a stronger argument in support of slavery or the subjugation of women that I can the condemnation of homosexuality.  I am not going to drag you through the long process of examining scripture now.  If you sincerely agree with Rev. Lambrecht, you wouldn’t believe it from me anyway.  If you believe that scripture clearly condemns homosexuality, I would encourage you to look into those scriptures that are used against those who experience and act on same-sex attractions.  Take an honest, hard look at them.  What I believe you will find is anything but clarity.

Find me on Facebook at www.facebook.com/AuthenticCulbs
Posted by Authentic Culbs at 6:46 AM